Originally commissioned by the G20 in advance of its 2011 summit in Cannes, “Candy Nations” is on view along Broadway from West 36th through West 39th streets.

IT’S A WRAP: At a time when candy colors are back in fashion, French artist Laurence Jenkell’s candy sculptures have been unveiled in the the Garment District.

But her work has more of an intercontinental theme than a sugary-sweet one. Originally commissioned by the G20 in advance of its 2011 summit in Cannes, “Candy Nations” are on view along Broadway from West 36th through West 39th streets. 20 nine-foot sculptures enwrapped in what look like national flags are on display. “The funny thing about candy is that it rings a bell to anybody in the world. Candies, of course, are international,” Jenkell said. “People love their countries, so they love seeing these sweets. It’s the type of sculpture that when you see it, you remember it normally. Sometimes you want to touch it or you may get the flavor of whatever flavor it is. It reveals all the senses.”

Reached in Saint Tropez, where she was preparing for the opening of a solo exhibition at the Artmedy Gallery next month, the artist said the same gallery recently showed her work in its Istanbul outpost. Her Garment Center installation is not her only presence in New York, either. Jenkell’s creations are shown in the Port Authority Bus Terminal through the end of the year.

The Garment Center Alliance approached her about this fall’s installation after seeing her work in a pop-up gallery in the Port Authority. Environmental issues such as the proliferation of non biodegradable products is the focus of that show, which runs through the end of the year. In France, travelers passing through the Nice Côte d’Azur International Airport will find one of her candy sculptures on the outskirts, thanks to the French conglomerate VINCI, which bought the piece. Overnighters at the W Hotel in Shanghai can also see Jenkel’s take on candy.

The Chanel Foundation, Coca-Cola and the International Olympic Committee are among the organizations that have commissioned work from Jenkell. Translating her work for some type of fashion show is one idea that is being mulled over, although she declined to identify the companies. “I am very much involved in the fashion world. The plexiglass with the folds and everything, the candy [sculpture] is very much about fit and chic also,” she said.

Another Jenkell piece will be displayed on the sidelines of the Venice Biennale, and next summer her work will be shown at The Musée des Beaux-Arts de Chambéry in France, as well as in a Belgium gallery. The artist is also toying with the idea of a candy-inspired fashion collaboration. “You never know what may happen but I cannot really talk about it at the moment. We are in discussion with some people. But I am very much interested in fashion and mixing art with fashion.” she said.

This week’s stay in New York will be a 48-hour visit, since Jenkell needs to wing it to Monte Carlo for Sunday’s Influencer Awards Monaco. The artist designed the awards for this year’s recipients. 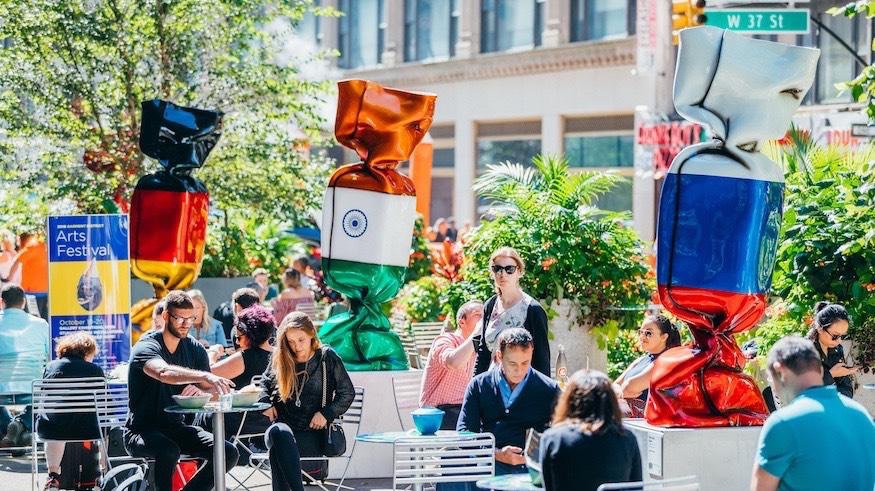 Address: USA, New York, along Broadway from West 36th through West 39th streets
Back to the exhibitions